I have known Karl Page through his work on several Renovations and Additions over a period of years.

His work is of high standard,the building site is well organised,safe and tidy. The atmosphere of calm, purposeful productivity is consistent when ever I am on site and the Owner is very satisfied also with all aspects of the work.

Karl has a good rapport with other trades people on site, and his technical construction skills and supervision are clearly apparent.The team works well together in succeeding to achieve great results.

I have known Karl since his involvement in our project at 56 Fairlight St Fairlight in 2000. He has impressed with his quality workmanship and ready grasp of the entirety of issues involved. I have recommended Karl for other projects which he has completed  to the owner’s and my satisfaction. I recommend him as a skilled, fully licensed builder.

Mr Karl Page is a Builder/Carpenter tradesman that I have known for five years, we have worked together on a number of residential projects during this period. I have found that Karl is a competent and reliable person of responsibilty and project management. I am happy to recommend Karl to future clients.

Over the past few years I have known Karl Page on several construction projects. During the progress of the jobs on discussions with myself and Karl, he has displayed an understanding of what constitutes structural integrity and has shown an awareness of the various forces that affect structural integrity. He demonstrates good knowledge in all aspects of domestic construction, has a good repour with his peers and displays a strong ability for solving difficult building anomalies.

I have found Karl to be diligent and competent in carring out his duties. He is well organised and easy to work with.

Blackwood Architects engaged Karl of Eye Build to carry out major alterations and additions to a dwelling in Manly. The project, which commenced in October 2010 required a high quality of architectural work and detailed internal fitout. The contract value with variations was $305,000.

Karl demonstrated a professional standard of workmanship and attention to detail. The project was managed effectively and subcontractors were supervised in an efficient manner. Regular site meetings were conducted and the builder exhibited good communication and coordination skills.

Karl Page in my opinion has demonstrated the capability to undertake construction of a high standard and value. 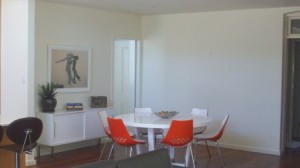